The Most Wonderful Gift I Ever Recieved

I am writing this personal story to shed light on an important and life-changing gift that I received: organ/tissue donation.

When I was growing up my eyes were normal and I passed my eye exam to obtain a drivers license at the age of 16 with 20/20 vision. By the time I was 17 going on 18 my vision had rapidly deteriorated to a point where I was almost legally blind in my right eye. My mom was the one who realized something was wrong one day as I squinted fiercely to see who was walking into the pizza shop where I worked. I didn’t know it was mom till she got up close. Pretty crazy stuff.

After a few trips to the optometrist and eye specialists, I learned that I had a degenerative disease called Keratoconus; a disorder of the eye in which “structural changes within the cornea cause it to thin and change to more or a conical shape than the more normal gradual curve.”

By the time I reached my 20s, my conditioned worsened and a corneal transplant surgery was performed at the U of S in Saskatoon. I was given the gift of the donor tissue from someone who had just passed away. Their family had decided to have the organs and tissues donated for transplants of many kinds. I am so grateful for this gift and I have always tried to honor it by speaking out and encouraging organ/tissue donation and becoming an organ donor myself.

I remember the first time I went outside shortly after the operation. I was in amazement as I looked at distinct blades of grass and individual leaves on trees. “Mom I can see!” I said. I could finally see clear details instead of blurred blobs of colour.

I moved to Vancouver shortly after the operation to pursue my life-long ambition of playing music. I fronted different rock bands, writing and recording the songs that we made up in a garage and brought to the live stages around town. I also did so many things that I wanted to do with my life. I was a bicycle courier for four years and then I wrote and passed my class 1 driver’s exam and became a commercial truck driver. All the while I wore a special/hard contact lens to combat the Keratoconus effects in my left eye. It was a very special time in my life where I learned about sharing and giving back to community.

In 2002 the eye specialist whose care I was under in Vancouver, Dr. Simon Holland, announced that I had made it to the top of the donor list and that I should prepare for a call to surgery at any time. I had been on the list for just over 2 years. I was back in the OR in no time at St. Paul’s Hospital. A corneal transplant surgery was performed on my left eye and it too worked very well. Since that time my quality of life has significantly improved. I have continued to drive commercial trucks as well as tour across most of Canada playing music.

I have recently recorded my 3rd solo album project called “Right Back Where I Need To Be” and I am very proud of it as a Canadian Country Music Artist and as a song writer and performer, It’s been a great ride.

Several fans have asked me why I haven’t been playing live shows this last couple of years. I had initially decided to keep my accident under wraps, but I realized that sharing this story might make a difference in some way. I’ve come to a point where I want to share this journey with people. Many of you have followed my career and supported me in living my musical dream.

In 2012 I my wife and daughter and I relocated to Calgary, Alberta. I took a job working with a commercial construction company while I waited for my album to be finished. It was a great way to support my family and my music dream as well. It’s funny how some decisions impact your life in ways you could never imagine.

While on a job site in January of 2014, I sustained a serious injury to my right eye. I was lifting some sheets of fiberglass and my hand slipped off. My eyeball took the full force of my knuckle, a very unfortunate “bulls-eye” so to speak. I doubled over from the pain and I knew right away that I was in trouble. When I stood up, blood and fluid poured from my eye. I was rushed to Rockeyview Hospital where Dr. Gimbel, a pioneer in eye surgery was called in. Dr. Gimbel managed to save my eye, but later confirmed that the blow ruptured the corneal transplant and both my iris and lens were knocked out. This injury has left me with very limited vision; I do not have the ability to focus and my depth perception has been affected. Luckily, my retina remained intact.

The last several months have been filled with appointments to various specialists in British Columbia and Alberta. There have certainly been some tense moments while I waited to find out if I would be able to regain sight in my right eye. Photos were taken of both of my eyes to determine what course of action the specialists can take. During this time, I was not able to renew my commercial driver’s license or do anything that put a lot of pressure on my eye. It has been a challenging time in my life.

A couple of weeks ago I received the best news I could ever hope for. Due to the amount of damage my cornea sustained, I am close to the top of the donor recipient list. In July 2014 I was back in the OR with Dr. Holland where he and his medical team performed an aggressive surgery to insert an artificial lens, an artificial iris, which has been manufactured in Germany from the photos taken of my left eye. Then after those two parts have been surgically implanted another corneal graph will be done. A third cornea donation, another life altering gift.

The iris will not function, but it will provide relief from too much light entering my eye. The hope is that after the operation and some additional laser surgery on the lens, I will have enough sight to drive commercially again. I am incredibly fortunate and appreciate what science and medicine have been able to do for myself, and people world-wide.

None of this was possible without the cornea tissue donated by a person who took the time to fill out their donor card; or perhaps it was someone’s family who had to make difficult decisions right after losing a loved one. I am the humble recipient of this gift, not once, but three times. My life has been changed in a most profound and positive way by people I will never know. For that I am eternally grateful.

So, I want to say thank you to those people out there who have signed the donor cards and to the families who have decided to share the organs and tissue of their loved ones. This kind of gift saves lives and improves the quality of life for so many others. I hope I speak for all of us who have received transplants with these words of thanks.

I have a long road of recovery ahead of me. It will be many months of healing, tests and observations. I am confident that I can retain my Class 1 license and, of course, I will continue to pursue my passion of singing and playing live music.

Soon I will be able to get back to doing the things I love… because of a very precious gift. 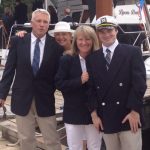